“I’m getting divorced” are not the three little words you anticipate saying when you are young and in the throes of love. In fact, no bride ever tries on a wedding gown and thinks, “I can’t wait to trash this.” When I first said those three words eight years ago, I felt like a big failure.

In the middle of my unraveling marriage, it never occurred to me that my life was going to be better because I had the courage to get a divorce. Selling a beautiful house, liquidating and dividing our assets, was a low point for us. We each had to move in to separate apartments, and our two boys had to share bedrooms and divide their time between us.

During this time, I often said those three words, “I’m getting divorced.” I felt so much shame in those words, like they signified my biggest failure in life. Little did I know that the best was yet to come, and the growth I earned in the process would transform me.

In this little apartment, I found my better self. I learned to deal with tantrums in a calm voice. I stopped drinking wine, which was once my crutch to release the stress of the day. I found my new escape to be the view outside and sitting by the window in thought, even in prayer.

I learned to recycle. I planted flowers outside my door. I learned to fill the battery fluid in my car thanks to YouTube. I took my kids on adventurous outings all by myself. I grew my sense of independence and self-worth. I learned how to reinvent myself and be the person I wanted to be. I learned how to love myself.

It took a year for my ex and me to complete the dissolution paperwork on our own. There were upsets and fights along the way. We learned to only meet in public places and to deal with our emotions calmly. We learned that we both felt scared for the well-being of our children, and our paperwork was a tribute to them. Every decision was a compromise to find what would be best for the kids.

We got through it. When we finally went to court to get divorced, we supported each other knowing we both agreed on everything. This fact affects us today in our interactions with each other. There is no fighting; we already did the hard work, and now we are on the same side co-parenting our kids. We are better parents today because of this. 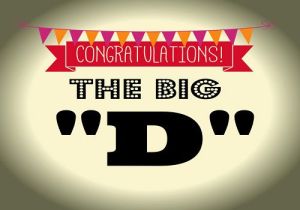 A divorce is not something you can hold as a secret. It is usually one of the first things you learn upon meeting someone. I recently saw an old friend from grade school, and within five minutes, she referred to her two divorces and two “failed marriages.” This made me think. Was my marriage a failure? Did I put 13 years in only to fail at it?

I know I felt that way early on. But now that I am through it and the pain of our unraveling a life together is in the past, I celebrate those years for the gift of growth my marriage has given me. It was not a failure; it was 13 years of life. We came together for the reason of producing two wonderful children. We did not have the guidance or the tools to cultivate a loving relationship, or the ability to create it from the trenches we were in.

I believe my first marriage was a success, because with that experience I was able to go forward with new criteria for relationships. I am remarried now, and I chose this man with a huge curated list of must-haves and values. Every day, I feel loved by him and gratitude that I had the courage to move on and experience vulnerability and meaningful love. I wouldn’t be here today if it weren’t for my first marriage.

My ex moved on as well, and his girlfriend is wonderful. I see that she is able to communicate with him in ways that I never could. We celebrate birthdays together as one big awkward extended family, and share a bleacher at all our kids’ games. Our children are the beneficiaries of so much more love. They don’t have two half-time parents, we each give 100 percent.

My boys do not have parents who “made it work” but suffer a life full of resentments and anger. Instead, they are lucky to have parents who had the courage to step in to the discomfort of divorce. All of our lives are better for it.

Out of the ashes of divorce, a new kind of family blossomed. For this, I say it is time we celebrate divorce and put the shame aside. It is a hard thing to do, but know that there is so much good to come from it. When I first met a now dear friend, I told her the three words, “I’m getting divorced.” She said to me, “I’m sorry, and congratulations.” Obviously she knew what she was talking about.

« Cheated! 8 Reasons You HATE ‘The Other Woman’ More Than Your Cheating Husband