Infidelity—unfaithfulness in a marriage or committed relationship—can severely strain a relationship and the individuals involved. One partner’s affair can leave the other person feeling devastated, alone, betrayed, jealous, confused, and aggrieved. Sometimes, an affair ends a relationship, and other times couples are able to repair the relationship on their own or with the help of a therapist, often making the relationship stronger as a result.

Studies show that although adults in the United States (other than those in polyamorous or open relationships) generally expect sexual monogamy in their relationships, up to 20% will engage in extramarital sex at some point. Affairs happen for myriad reasons, but one main reason appears to be relationship dissatisfaction. In general, a successful relationship requires feelings of stability and security, physical and emotional intimacy, and companionship. When any one of these is deficient, one or both partners are likely to feel dissatisfied, and dissatisfaction in a relationship can increase the likelihood of infidelity.

Adultery does not always occur as a result of relationship dissatisfaction, though. Sometimes a partner may enter an affair based on personal dissatisfaction or for the personal gratification of obtaining an ego boost, a new sexual experience, or shared emotional intimacy.

Some of the reasons a person may engage in infidelity include:

Statistically, men are almost 80% more likely than women to have engaged in adultery, and living in a larger city increases the odds that an incidence of infidelity will occur by almost 50%. Infidelity is also more common among the young, with twice as many cases of infidelity reported among those aged 18–30 as those over the age of 50.

Some researchers point out that sexual monogamy is not common in the animal world but is instead a construct of human beings that tends to conflict with the biological desire for multiple sexual partners. Despite this fact, a large number of people continue to aspire to such ideals, and many cultures throughout the world demand sexual fidelity by harshly punishing those who stray. 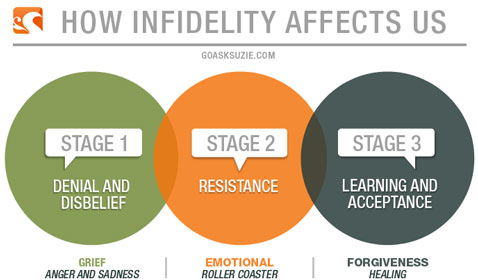 Several different types of infidelity can occur in a relationship.

An object affair can be described as the neglect of a relationship for the sake of pursuing an outside interest. This pursuit may reach a point of near-obsession.

What one person considers infidelity may not be considered infidelity by others. For example, a person might not consider his or her partner’s viewing of pornography to be cheating, while another person might consider it to be infidelity and experience feelings of inadequacy as a result of the disclosure.

The manner in which couples recover from infidelity will depend in large part on their cultural background and their personal or religious values surrounding infidelity. Many couples pursue therapy to determine whether or not to continue the relationship after an affair and to process their feelings surrounding the incident.

A therapist can also help clarify the true nature of the relationship by encouraging an open evaluation of the relationship’s strengths and weaknesses. If unhealthy patterns exist, such as codependency, emotional abuse, or repeated affairs, the therapist may call these into question. In addition, therapy can help those people who feel they are to blame for the infidelity of their partners to work through those feelings and obtain new perspectives.

When a couple decides to end the relationship, a therapist can still be of assistance to both parties. The partner who was betrayed may find it beneficial to discuss his or her feelings of inadequacy, betrayal, and anger, and a therapist can also assist in helping him or her cope with the trauma of the loss of a partner. The partner who committed the infidelity may feel regret and wish to understand what caused him or her to pursue an affair. If the individual had an affair after realizing the relationship was not satisfying, for example, a therapist can help him or her determine ways to communicate feelings of dissatisfaction more effectively so that he or she does not repeat the behavior.

Recovery, should a couple choose to maintain a relationship after infidelity, can be a lengthy process. Although there are no steadfast rules for determining how quickly or whether a couple will recover from an affair, experts agree that healing can often occur within two years, though some couples may take longer to fully recover, while others can repair their relationship sooner. Again, there is no concrete timeline for recovery, and the length of time recovery takes is often directly related to what happens immediately after the affair is discovered.

Other factors that influence the recovery process include each partner’s communication skills, tolerance for conflict, capacity for honesty, acceptance of personal responsibility, and attachment style. Just as each relationship is distinct from another, the process of recovering from infidelity will vary from one couple to another. Recovery typically progresses through the following phases:

Next, couples can embrace the new relationship they have created. After working with a therapist, couples will likely have stronger, more genuine bonds. It may still be difficult for the betrayed partner to trust the other, and both partners may still experience difficulty understanding why the affair happened and accepting that the previous life they knew has been changed forever. But by practicing techniques learned in therapy, couples can continue to develop an open, honest, and new relationship, free of the encumbrances of the affair.

When a partner engages in repeated affairs, several issues are called into question. Were there issues leading to the first affair that were never addressed? How was the first affair handled? Was the offender genuinely remorseful? Did he or she take responsibility for his or her actions? Did the other spouse acknowledge his or her jealousy, dependency, anger, or even denial? Any of these unresolved issues can contribute to the recurrence of infidelity. Hilary Silver, LCSW has observed in her practice that repeated affairs tend to occur as a result of love or sex addiction and that “The behavior is a compulsion rather than a statement about the state of the relationship.”

Partners experiencing multiple infidelities must explore both the pre- and post-affair factors, identifying any behaviors, communication, and emotions exhibited, and each partner’s role in the relationship before and after. Partners should be honest with their feelings of hurt, guilt, and shame. In order to protect the relationship from future infidelities, the foundation must be solid after the affair, not riddled with doubt and insecurity.